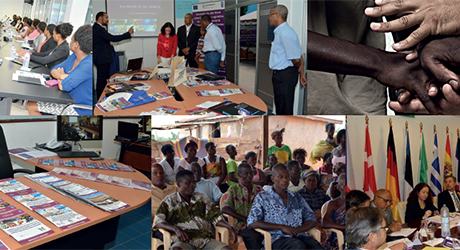 The Pro PALOP-TL SAI project had a lasting positive impact on the countries of the project scope, while involving key oversight stakeholders in their activities.

The Pro PALOP-TL SAI project promoted economic governance in ACP Portuguese Speaking Countries (PALOP and Timor-Leste) and strengthened the technical and functional competencies of the Supreme Audit Institutions, Parliaments, and Civil Society in the field of public financial management.

The project enabled the capacity-building of beneficiary institutions, the development of skills, know-how and knowledge of oversight stakeholders. Therefore, the project had a real impact on people’s lives, and the overall framework of public finance management and budget oversight in PALOP and Timor-Leste.

In addition, 290 staff in Cabo Verde, Guinea Bissau, Mozambique, and Sao Tome and Principe participated in information and awareness-raising campaigns on budget transparency and PFM.

133 government officials – both from the Ministries of Finance and other departments – in Angola, Cabo Verde, Guinea Bissau, Mozambique and Sao Tome and Principe were trained in gender responsive budgeting methodology.

Here are some of the longer-term outcomes and impact which have resulted from the above outputs:

In Angola, transparency of public accounts is named among priority issues in the new Executive’s agenda;

In Cabo Verde, the 2018 state budget law contains a chapter on gender responsive budgeting and a 4-level scale of gender markers. So far, more than 90 percent of budgeted programmes, projects and activities have been coded with a gender marker.

In Guinea Bissau, quarterly expenditure reports are now presented in town-hall meetings organized by the Ministry of Finance. Such reports are now being published in a timely manner and in two most-widely spoken languages of the country, Portuguese and Creole.

In Mozambique, gender markers are now ready to be operationalized by the Ministry of Finance. A standard operating procedure to ensure the follow up to SAI recommendations by the country’s General Inspectorate of Finance is in place and being widely shared in the central and local decentralized units.

Back to Levels of Results