Ghana: Tensions in the National Democratic Congress (NDC) over parliam...

Somali Parliamentary Elections - of the Progresses and Pitfalls 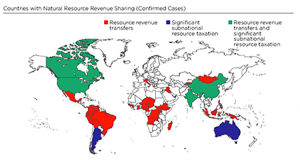 Despite a peace agreement signed last year, Libya remains embroiled in violent conflict. At the heart of the conflict is oil, which accounts for more than 90 percent of government revenue.

The vast majority is produced in the country’s east and south, while the commercial and administrative capital, Tripoli, is in the west. Just like in other parts of the world suffering from natural resource-fueled conflicts, disagreements over how national and subnational authorities should share the revenues from non-renewable resources are threatening the nation’s stability and future.

Beyond their potential for bringing peace, revenue sharing systems can compensate producing regions for environmental damage and loss of livelihoods associated with oil, gas and mineral extraction. They can also serve as an acknowledgement of local claims over resource wealth, even in regions without conflict.

This approach has been used in Indonesia’s Aceh region, Papua New Guinea’s Bougainville region and Nigeria’s Niger Delta to defuse resource-fueled civil wars, reduce poverty and promote economic development in resource-rich regions, with a degree of success in each.

In particular, derivation-based systems—where a large portion of resource taxes are either collected directly by subnational governments or transferred by national governments back to their area of origin—intensify boom-bust cycles at the local level. These systems undermine some key principles of sound financial management, such as matching local government revenues with the cost of their regulatory, social service and infrastructure responsibilities.

Worse, in some cases these systems can actually exacerbate violent conflict. Poorly designed systems can incentivize groups to seize control of extractive sites to access a higher share of revenues, as in Peru from 2005 to 2008. Local leaders can then use these revenues to finance violence. Other problems relate to inadequate transparency and oversight or the failure of national governments to make fiscal transfers according to the agreed formula.

While NRGI and UNDP do not advise countries to simply adopt other countries’ systems, we do advise learning from their experiences and “mixing and matching” elements that work well in similar situations. In our report we offer 10 recommendations, mindful that each country is unique. Among these recommendations is that national and local leaders:

During the last resource price boom, which lasted roughly from 2002 to 2012, resource revenue sharing systems proliferated. During that decade, the amount of money that subnational resource-rich governments earned—either from direct tax collection or intergovernmental transfers—grew substantially. Today, there are more than 30 resource revenue sharing systems around the world.

While the urgency of agreeing on a revenue sharing formula has lessened since commodity prices fell in 2014 and 2015, the issue remains important. Commodity prices are already starting to rise, and new systems or reforms are being proposed, not just in Libya but also in Kenya, Indonesia and elsewhere. Should Libya adopt a resource revenue sharing system, policymakers would be wise to heed the lessons of other countries—both the successes and failures.