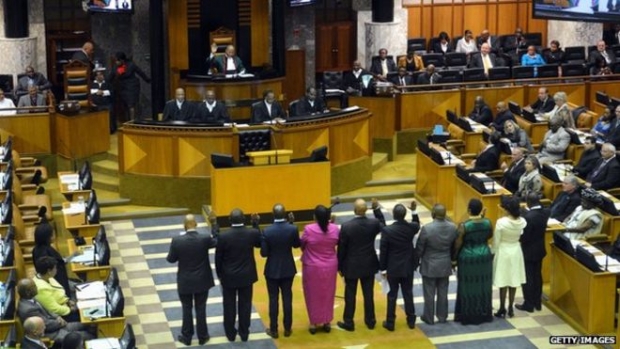 The latest version of the long-awaited and reworked Traditional Courts Bill, which will comply with the Constitution and Bill of Rights, is on its way to Parliament.

The Bill aims to affirm the recognition of the traditional justice system and its values based on restorative justice and reconciliation, and to provide for the structure and functioning of traditional courts in line with constitutional imperatives and values.

The move to take the Bill to Parliament follows the approval thereof at the last Cabinet briefing in 2016. Cabinet had approved the latest version of the Bill after work by the Department of Justice and Constitutional Development and a reference group.

The updated Bill addresses the concerns that have been raised before, the Department of Justice and Correctional Services announced at a media briefing on Monday in Pretoria.

Since 2009, the Bill has been rejected by Provincial Legislatures and interest groups out of fear that it gives too much power to traditional leaders in rural areas and was also open to abuse of power.

There were also fears that the rights of women would be compromised.

Speaking to the media on Monday, Justice and Constitutional Development Deputy Minister John Jeffery described the Bill as an "end-product of a collation of ideas and wisdom", which will help to resolve disputes faster.

"The Traditional Courts Bill, in its revised form, provides the desired framework which is in line with our democratic Constitution. The enactment of the Bill will put an end to the abuse of the system which has been manipulated to serve the interests of colonial and apartheid regimes," the Deputy Minister said.

According to the department, the policy framework for the traditional justice system under the Constitution plays a crucial role in promoting social cohesion, peace and harmony in communities.

In this sphere of the administration of justice, traditional leaders resolve disputes through traditional courts known as Makgotla or Inkundla.In these courts, the language and methods used are ones that the community understands better than the procedures applied by formal courts.

The disputes are also resolved according to cultural practices and customs applicable to the community in question. This way, justice is dispensed easily and quickly.

Deputy Minister Jeffery said the Bill will improve access to justice, as these courts are easily available to local communities and will dispense justice speedily and cheaply.

In the revised version of the Bill, the system would allow the assistance of women and other vulnerable members of society, as in some communities, women participation in such courts is prohibited.

The Bill states that these courts must be constituted of women and men.Government acknowledges that they would have to undertake an extensive education drive to rural communities about the rights of women in these courts.

On sanctions, the Bill proposes that an order may be expressed in monetary terms or otherwise, including livestock, for the payment of damages suffered, on condition that the order for damages may not exceed the value of the damage in question or the capped amount determined by the Minister of Justice and Constitutional Development by notice in the Gazette from time to time, whichever is the lesser.

The Bill permits an order of community service, on condition that it is not for the benefit of a traditional leader.

Guarding against abuse of power

Cooperative Governance and Traditional Affairs (Cogta) Deputy Minister Obed Bapela said the issue of abuse of power is a concern.

"We will have to generate public awareness and education across communities, so that we can ensure that there is normality and that the rights of the people are emphasised and protected. If abuses arise, they are to report them so that we can deal with them."

The Bill also suggests that traditional courts should deal with certain minor disputes or infractions, whether they are civil or criminal in nature, without categorising them as such.

Traditional courts would go about their responsibilities in such a manner as to achieve conciliation between the parties and should have the power to grant compensatory type awards. Criminal convictions are not envisaged at all.

With the traditional justice system geared towards achieving conciliation between the parties in a non-adversarial manner, unlike other courts, the Bill indicates that there is no need for legal representation in these courts. Instead, a party in a traditional court should be able to be represented by any person of his or her choice, including a family member, whether male or female, a friend or a councillor.

Regarding appeals, the new Bill proposes that a person who is aggrieved by a decision of a traditional court could escalate the matter to a structure within the customary law environment, possibly to a structure constituted by the National or Provincial Houses of Traditional Leaders.

Appeals may, however, not be lodged on the grounds of procedural deficiencies. Procedural short-comings may only be dealt with by way of review.

Deputy Minister Bapela was confident the latest version of the Bill would pass constitutional muster.

"We need this legislation because this practise is still going on in rural communities. What we are trying to do with the [traditional courts] is to regularise them so that there are norms and standards to ensure that all the fundamental freedoms of people are equally enjoyed," said Deputy Minister Bapela.

Deputy Minister Jeffery said the next move is to send a copy of the Bill to the State Law Advisor, and send it to the Speaker of Parliament by the end of next week.

He said they will be working around the clock to ensure that the Bill Is introduced as soon as possible.

This Article has been cross-posted from AllAfrica