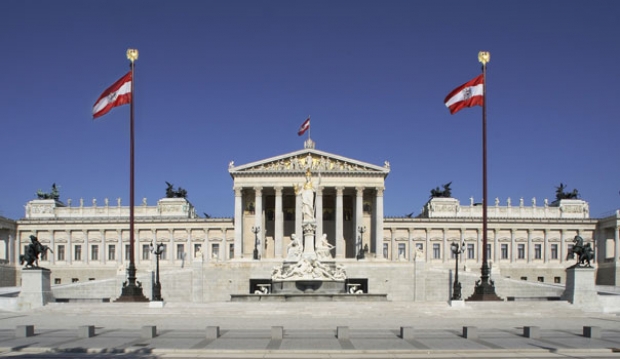 VIENNA (Reuters) - Austrian conservatives and the anti-immigrant Freedom Party (FPO) have agreed to expand voter participation in legislative matters in their coalition deal to bring the state closer to the citizens, the party chiefs said on Saturday.
Austria is set to become the only western European country with a far-right party in government after the FPO under Heinz-Christian Strache and Sebastian Kurz’s People’s Party (OVP) struck a coalition deal on Friday.
But their plans for more direct democracy ruled out referendums on Austrian membership of the European Union.
“Our model does not provide for any referendum ... that contradicts European law or fundamental rights or our constitution,” Kurz said.
“It is also clear that there will be no votes on our memberships in international organizations including the European Union.”
The introduction of more ways for voters to participate in the legislative process was one of the FPO’s main conditions and also one of the most difficult issues in the coalition negotiations.
In Austria around 8,000 signatures are needed currently to initiate a popular petition.
If the petition then gets more than 100,000 signatures it must discussed in parliament. Such petitions are not legally binding and often do not result in legislation but they can fuel the public debate.
In future, if a petition has the support of 900,000 voters and parliament does not support the issue, it can be turned into a legally binding referendum, Kurz said at a news conference in Vienna, where he and Strache presented the coalition program.
Austrians will have to vote on this proposal as it will require a comprehensive change to the constitution, for which a vote is already mandatory, Kurz said.
There were only two binding referendums in post-1945 Austria: The nuclear power referendum in 1978 and the European Union membership referendum in 1994.
“History will be written (with this initiative),” said Strache.
In Europe, the Swiss vote the most, whereas Germany has not as yet held a nationwide referendum. Ireland and Italy are the European Union countries with the most referendums.
Crossposted from: https://www.reuters.com/article/us-austria-politics-direct-democracy/aus...