Zimbabwe's parliament will hold its inaugural open day from June 8-9 as it pushes with refor...

Antonio Guterres to be sworn in as next UN Secretary-General
...

What Do You See When You See A Homosexual: DU students engage in an op...

What does one see when they see a homosexual? Is sexual orientation the only identity they s...

Campaigners have condemned the “shocking” decision to reject a petition for LGBTI+ t... 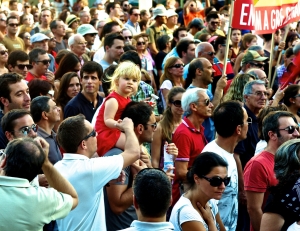 Portugal has announced the world’s first participatory budget on a national scale. The project will let people submit ideas for what the government should spend its money on, and then vote on which ideas are adopted.

Although participatory budgeting has become increasingly popular around the world in the past few years, it has so far been confined to cities and regions, and no country that we know of has attempted it nationwide. To reach as many people as possible, Portugal is also examining another innovation: letting people cast their votes via ATM machines.

‘It’s about quality of life, it’s about the quality of public space, it’s about the quality of life for your children, it’s about your life, OK?’ Graça Fonseca, the minister responsible, told Apolitical. ‘And you have a huge deficit of trust between people and the institutions of democracy. That’s the point we’re starting from and, if you look around, Portugal is not an exception in that among Western societies. We need to build that trust and, in my opinion, it’s urgent. If you don’t do anything, in ten, twenty years you’ll have serious problems.’

Although the official window for proposals begins in January, some have already been submitted to the project’s website. One suggests equipping kindergartens with technology to teach children about robotics. Using the open-source platform Arduino, the plan is to let children play with the tech and so foster scientific understanding from the earliest age.

Proposals can be made in the areas of science, culture, agriculture and lifelong learning, and there will be more than forty events in the new year for people to present and discuss their ideas.

The organisers hope that it will go some way to restoring closer contact between government and its citizens. Previous projects have shown that people who don’t vote in general elections often do cast their ballot on the specific proposals that participatory budgeting entails. Moreover, those who make the proposals often become passionate about them, campaigning for votes, flyering, making YouTube videos, going door-to-door and so fuelling a public discussion that involves ever more people in the process.

On the other side, it can bring public servants nearer to their fellow citizens by sharpening their understanding of what people want and what their priorities are. It can also raise the quality of public services by directing them more precisely to where they’re needed as well as by tapping the collective intelligence and imagination of thousands of participants.

The model began in Porto Alegre, Brazil, in 1989, and has become popular around the world in recent years, with more than 1,500 places estimated to have adopted some variation. The largest by funding is in Paris. In 2016, only its third year, the scheme disbursed €100million (some $110million) and it plans to have spent €500million ($550million) by 2020.

Although Portugal has allocated only €3million for this first year, the fact that it is operating nationwide has given rise to some special characteristics. For one thing, Portugal has ten million inhabitants, compared with some two and a quarter million Parisians, of whom 158,000 voted. For another, while one pot of money has been allocated to specific regional projects, the proposals drawing on the national pot must improve the links between different parts of the country by working across them.

‘Portugal is well-established in terms of its territory, borders, population, and has a cohesive identity,’ said Fonseca. ‘But we need to be able to better connect the interior and the littoral, urban and rural areas, and we have a chance to do it because we are a medium-sized country that is very coherent.’

Nevertheless, it is difficult to reach people in the poorest and most rural areas, and one of the perennial problems with participatory budgeting is that people who are already marginalised often fail to assert their agenda. This is where the ATM idea comes in.

Although it will not be used this year, because the project is still very much in the trial phase, the use of ATMs is potentially revolutionary. As Fonseca puts it, ‘In every remote part of the country, you might have nothing else, but you have an ATM.’ Moreover, an ATM could display proposals and allow people to vote directly, not least because it already contains a secure way of verifying their identity. At the moment, for comparison, people can vote by text or online, sending in the number from their ID card, which is checked against a database.

For now, Fonseca and her colleagues are concentrating on making this trial run smoothly. Before taking this job, she ran Lisbon’s participatory budget for six years, developing it in discussion with colleagues from Paris, New York and Brazil, and she believes that it will take at least five years for the nationwide program to become known and recognised.

‘I’ve been in this process for so many years now and I always have the same feeling,’ she said. ‘In these times of so much information, you’re so surrounded by content and social networks that it’s difficult to get to people and say: this is happening. We’ll probably get a lot of people voting if we have a good lot of proposals. If people see proposals that they relate to, that they see will be good for their regions, for their cities, for their neighbourhoods, then people will campaign and they will vote.’