Digging for the missing $15 billion of diamond revenue in Zimbabwe

Civil society groups, under the aegis of the Natural Resources...

Proposed law backed by Netanyahu would curtail ability of political groups like V15 to raise...

Campaigners have condemned the “shocking” decision to reject a petition for LGBTI+ t...

Ghana: The development plan needs attention of all - Thompson

Ireland's "Yes" vote in May's referendum on same-sex marriage and the months of national deb...

Hundreds took part in the parade, demanding rights granted to sexual minorities -- and other...

Police tonight arrested 16 students, including three women, who were holding a demonstration...

Te Jeevanjee Gardens, a verdant pocket in the bustle of Nairobi, Kenya's capital, is loved b...

Making the most of Citizens Budgets 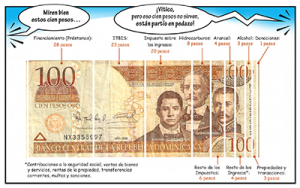 Government budget documents are hardly page-flipping bestsellers. They usually consist of hundreds of pages of numbers and charts accompanied by technical jargon that even readers with advanced degrees find difficult to decipher. No wonder then that most citizens have hard time understanding what government budgets are about, despite the huge impact that they can have on their livelihoods. In many countries civil society and the media play an important role in “translating” budget information for a general audience. But governments should also lead on informing the public about budget processes and policies. One way to do so is to publish Citizens Budgets — shorter, simpler documents aimed at a general audience.

These kinds of non-technical documents have become more and more common over the last decade. In 2010 less than one in five countries covered in the Open Budget Survey published a Citizens Budget, by 2015 more than half did so. Institutions such as the World Bank and the OECD have also started encouraging governments to use them as a part of their strategies for presenting key fiscal information to the public.
There are numerous approaches to publishing and disseminating a Citizens Budget. We’ve put together a resource page to provide some useful guidelines on how they should be compiled, when they should be published, and how they can be disseminated. But there are two aspects worth exploring further: the importance of involving the public in developing a Citizens Budget, and the need for more innovative strategies to reach a wider audience.

THE IMPORTANCE OF CITIZEN INPUT

Given that Citizens Budgets are aimed at the general public, it makes sense to ask what steps are taken to ensure they are relevant and accessible to a general audience. One way to do so is to involve citizens in the process, yet few governments are making an effort to do so. The Open Budget Survey 2015 found that only 17 out of the 102 countries surveyed had established mechanisms for public consultations on the Citizens Budget.

A number of countries are taking steps to get the public more involved, however, and such leaders can provide useful models for others to learn from. In Morocco the finance ministry published the Citizens Budget online and established a dedicated email address for citizens to submit ideas and recommendations on improving the document. The ministry carried out an external satisfaction survey in 2013 to better understand what citizens knew and thought about the objectives and content of the Citizens Budget. South Korea and Sweden have each established ways for citizens to provide suggestions, ideas, and comments on their Citizens Budgets. These are often web-based systems that are accessible and widely used by the public, and allow for comments on a wider range of issues beyond those strictly related to the budget.

Civil society organizations (CSOs) have been integral to the process in a number of countries. Since 2012, the Tanzanian finance ministry has worked closely with a CSO-led Budget Working Group to draft and publish a Citizens Budget. Tanzanian civil society has described the relationship as very collaborative and one that has driven many creative and inclusive ideas. The National Audit Office has also been producing Citizens Audit Reports (simplified versions of audit reports) each year, and has worked with CSOs to ensure they reach a wide audience and have an impact.

Other countries’ efforts to engage with citizens have been less constant, but nonetheless provide some original ideas that could be replicated elsewhere. The Brazilian Federal Budget Secretariat conducted a public opinion survey to improve the content, drafting process, and dissemination of the 2013 Citizens Budget. In the Dominican Republic, the budget office conducted surveys and held focus groups with CSOs, citizens, and experts to source improvements to the Citizens Budget Portal they were building. It is unclear whether the process has been replicated, but Citizen Budgets have been published in both 2015 and 2016.

STRATEGIES FOR REACHING A WIDER AUDIENCE

The Open Budget Survey also examines how governments disseminate Citizens Budgets to reach as wide an audience as possible. Governments should use a variety of means (such as the Internet, billboards, radio programs, newspapers) to get the word out. Of the 54 countries that publish a Citizens Budget, 34 disseminated the document in more than one way and 14 in more than three ways. This suggests that many governments are taking the task of reaching a wide audience at least somewhat seriously.

There’s a few notable examples to draw on. The government of Mexico posted Citizens Budgets for both the 2014 Executive’s Budget Proposal and the Enacted Budget on their transparency website. Hard copies of these documents were also made available and posters were displayed in some federal government offices. Until recently the budget department in the Philippines produced simplified versions of a number of key budget documents and posted them on a dedicated website. Hard copies were also made available to citizens upon request, and given to lawmakers, CSOs, business groups, journalists, local government units, and schools. Finally infographics and audio-video versions were also released. In Sierra Leone the 2014 Citizens Budget was made available and budget discussions were held in town hall meetings, on radio, and on television.

IMPROVING THE REACH AND IMPACT OF CITIZENS BUDGETS

An increasing number of countries are publishing Citizens Budgets. Many are also turning to citizens to help them improve the document and devising different ways of reaching a wider audience with the information they contain. There is, however, significant room for improvement. Governments can do more to strengthen their public consultation mechanisms, both as part of a wider process of engaging the public on budget matters and to make Citizens Budgets more useful, accessible, and understandable to all.

While our resource page provides some useful guidelines and highlights some examples of innovative practice, we are always on the lookout for new and different approaches to engaging citizens in budgets and making Citizens Budgets a more effective tool for doing so. Get in touch if you have any examples of your own!