Ireland: No more lying: A private member's bill that makes it a c...

THE GOVERNMENT WILL not oppose a Sinn Féin Private Member’s Bill which will make it a crime...

House of Commons backs full move of MPs and peers to alternative sites while multi-billion p...

New laws to ensure the ruling bodies of public sector institutions are gender balanced have... 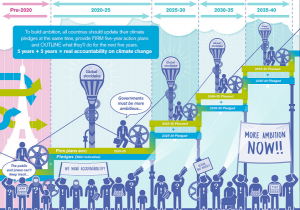 With growing focus on the importance of driving concerted climate action, IIED is calling for a more effective 'ambition mechanism' to be included in rules for the Paris Agreement.

The president of the Inter-Parliamentary Union (IPU), Saber Chowdhury, has told IIED that raising the ambition of the UN climate agreement is "absolutely critical".

Chowdhury spoke with IIED at the UN climate summit in Marrakech. The Marrakech meeting is the first global climate conference since the the landmark 2015 Paris Agreement which bound 196 governments to act to limit the global average temperature rise to well below 2°C, and pursue efforts to limit the rise to 1.5°C.

Chowdhury said that while there was a lot of euphoria surrounding the Paris Agreement, the current pledges on limiting climate change would produce a rise in global temperatures of 3.4C. Chowdhury said: "That's a huge ambition gap, in addition to an emissions gap. So that's where the focus has to be, that's where the action has to be."

IIED and partners are also calling a focus on climate ambition. They want a more effective 'ambition mechanism' to be included in the rules for the Paris Agreement.

The framework for the Paris Agreement includes a process for increasing efforts to limit climate change. But at present countries can update their pledges for action on climate change at any point, and set out their pledges in widely different terms.

Shakya said what was needed was a synchronised five-year schedule for all countries to update their pledges at the same time. The pledges should outline a firm plan for the next five years, and an indicative plan for the following five-year period (as illustrated in an infographic presented by Shakya for the first time at the 2016 Development & Climate Days. This infographic can be seen below and on IIED's Flickr site, where it can be enlarged).

Shakya said: "If we have that, there will be sufficient scrutiny by the global public, by the citizens of the world and by businesses to understand whether sufficient action is being taken – and if not, to push for further action."
IIED, together with Oxford Climate Policy, is working via the European Capacity Building Initiative (ECBI) to raise the issue of a more effective mechanism with climate negotiators, businesses and non-governmental organisations. The ECBI aims to build capacity among climate negotiators from developing countries, and to foster trust between negotiators from developed and developing countries.

The organisations say that the ambition mechanism could be introduced via a short amendment in the rules currently being developed for the Paris Agreement.

Shakya said businesses were especially keen to see an ambition mechanism, as it would help them to understand the level of ambition expected of them.

Shakya said: "Without this level of certainty and without having firm plans every five years and clear onward direction for 10 years, it's going to be impossible for businesses to understand the level of ambition and to keep investing in their supply chains."

The IPU held a joint meeting with the Parliament of Morocco at the UN climate conference. The joint meeting discussed legislation and the issue of bringing the agreement into law.

Chowdhury said that the role of MPs in formulating legislation appropriating resources through the budgetary process, in policy and oversight of government activities, meant that parliamentarians would be vital to the implementation of the Paris Agreement.

In addition to his role as political leader of the IPU, Saber Chowdhury is an MP in Bangladesh. Much of his political work has focused on climate change, disaster risk reduction, nuclear disarmament, sustainable development and the post-2015 development agenda.

He told IIED that for his country, the magnitude of the impact of climate change was huge. He said that a one metre rise in sea levels would lead to the displacement of 30 million people who were the "poorest of the poor". That figure was based on today's population, he added.

He said that climate change was also an entry point spanning a range of issues fundamental to development, including, for example, food security, desertification, rising sea levels, salinity intrusion, changes in rainfall patterns.

"Climate change is an entry point spanning a range of critical issues, fundamental to development more broadly – whether that be food security, desertification, rising sea levels, salinity intrusion, or changes in rainfall patterns," he said.