This is the most important vote in the country after presidential elections and this year it...

3-5th of April,the Sustainable Energy for All Forum
...

Parliaments from South America and the Caribbean mobilize around the S...
...

Climate change set to be included in educational curriculum
...

Leadership advocacy on climate action is one of the key tools to implement Sustainable Devel... 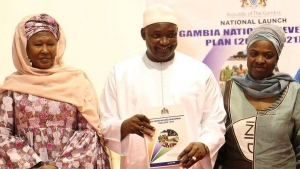 President Adama Barrow has launched a National Development Plan (NDP) for The Gambia. The document is the first such after the ouster of long serving leader, Yahya Jammeh.

According to the president: “The goal of the NDP is to deliver good governance and accountability, social cohesion and national reconciliation. Adding that: “It aims to revitalize and transform the economy for the wellbeing of all Gambians.”

The launch was held in the presence of the vice-president and speaker of parliament along with key government officials. Representatives of the United Nations and the European Union were also present at the occasion.

In his address, Barrow said the document had been written with continental and global projections in mind.  “It will also contribute to realisation of our global and regional commitments such as the Sustainable Development Goals (SDGs) and African Union (AU) Agenda 2063,” he said.

The plan meant to span between 2018 and 2021 seeks to bring about total and inclusive development in the tiny West African country. It is accompanied by a financing strategy that clearly articulates the financing arrangements for the effective implementation.

The presidential spokeswoman confirmed that there was going to be a national campaign to educate the citizenry on the roles they can play to ensure the realization of set goals as contained in the plan.

The Gambian economy is said to have suffered gross mismanagement during the over two decade rule of Yahya Jammeh. The former leader is accused of diverting state funds into his private custody. A government commission continues to hear testimony of how funds were pillaged.

Barrow has also nominated an executive secretary for a reconciliation commission meant to deal with rights abuse during the Jammeh ear. The commission will also be expected to offer reparation to victims where need be. Jammeh is currently on exile in Equatorial Guinea since early 2017.