"No One Is Listening": Incivility in Canada's parliament and how to fix it
British Columbia: Report on the Budget 2016 Consultations
Canadian Parliamentary Review, Vol. 37, No. 2 - Constituency Offices in Focus
Dialogues on Distribution of Powers and Responsibilities in Federal Countries
Evaluating Parliament: Objectives, Methods, Results and Impact. The Case of Canada’s Parliament
A Quality Framework to Assess Parliaments: Improving Efficiency and Effectiveness
The CPA Benchmarks and the Parliament of Canada - a Self-Assessment
Case Study from the CPA Parliaments: Canada. Presentation to WBI / UNDP Conference on Benchmarking and Self-Assessment for Democratic Parliaments
Colloque sur le Whip et la discipline
Précis d’information: le nouveau député et les comités

To read more on this subject:
Canada, indigenous rights

The Senate passed a bill that renders the national anthem gender neutral Wednesday despite t...

11-member panel will scrutinize activities of CSIS, RCMP and other agencies...

Canada: West End Dial-In shows citizens how to contact their member of...

The mainstream parties in the European Parliament have rejected by a large majority a motion...

CETA is ‘no gold standard’ finds report, ahead of vote in Parliament 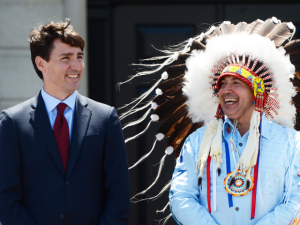 The Liberals are planning consultations on the new framework throughout the spring, but already, there are some hints as to what may change

OTTAWA — Prime Minister Justin Trudeau hopes his new Indigenous rights framework will transform the government’s relationship with Indigenous peoples by helping to rebuild Indigenous governments and keeping disputes out of the courtroom.

It’s an ambitious plan, especially given the lack of detail in the speech Trudeau made in the House of Commons on Wednesday.

“Going forward, recognition of rights will guide all government interactions with Indigenous peoples,” Trudeau said. “This framework gives us the opportunity… to recognize Indigenous governments and ensure rigorous, full and meaningful implementation of treaties and other agreements.”

What does that mean? At this point, it’s hard to say. The Liberals are planning consultations on the new framework throughout the spring, led by Crown-Indigenous Relations Minister Carolyn Bennett and Justice Minister Jody Wilson-Raybould. They aim to table legislation later this year, to be passed before the October 2019 election.

But already, there are some hints as to what may change under a new Indigenous rights framework.

Moving from bands to nations

This week, Bennett was clear she’d like to make it easier for Ottawa to negotiate with Indigenous groups that want to take control of education, health and other services. As it stands, there are more than 600 First Nation bands in Canada recognized under the Indian Act. But larger groups of First Nations aren’t generally recognized as legal entities.

Many individual bands are too small to deliver their own programs, said Ken Coates, a professor at the University of Saskatchewan. “These are tiny communities, and so a regional body has way greater potential to be able to afford the professional services and the administrative oversight and all that kind of stuff,” he said.

But it’s difficult for the federal government to negotiate with those larger bodies, said Bennett Wednesday. “(When) Indian Act bands… want to come together to make an education system or a child welfare system or anything, we have no way of funding that,” she said. “We only fund Indian Act bands.”

The Royal Commission on Aboriginal Peoples identified this problem back in 1996. “Bands are usually too small for effective self-government,” the commission’s report says, suggesting the real unit of First Nations governance should be larger nations that share common history, language and culture. It found there were “between 60 and 80 historically based nations in Canada.”

Bennett said a new framework will help bands to “get out from under the Indian Act” and group themselves into those larger nations to draw down jurisdiction over their own services. “We haven’t had a vehicle to do that,” she said.

In August, Ottawa signed an education self-governance agreement with the Anishinabek Nation, representing 23 member First Nations across northern Ontario. But that agreement came after more than 20 years of negotiations. An official in Bennett’s office said the government hopes to get that down to three to five years.

“What we’re saying is we want to get out of the business of delivering programs,” Bennett said during an address to the Assembly of First Nations Quebec-Labrador. “Programs should be delivered by Indigenous-led governments and Indigenous-led institutions.”

The official in Bennett’s office said the idea is that every department and agency should have to take that kind of approach when dealing with Indigenous rights, regardless of which political party’s in power. “The recognition of rights can’t just be left to the whim of the government of the day.”

Similarly, the official said, if a group of First Nation bands meets an agreed-upon definition of a broader nation, the government should not be able to refuse or delay negotiations with that nation. “It means that even if there was an election in Ottawa, you don’t lose years.”

The Trudeau government hopes its new framework will help reduce the number of court challenges from Indigenous communities. While Section 35 of the Constitution recognizes Aboriginal and treaty rights, Trudeau said on Wednesday, “those rights have not been implemented by our governments,” forcing Indigenous people into protracted court battles.

It’s not clear what measures are being considered to help prevent court challenges, though Trudeau spoke of “new ways to resolve disputes so that collaboration becomes the new standard.”

Coates pointed to some concrete examples from other countries. In New Zealand, for instance, the Waitangi Tribunal investigates and makes recommendations to the government about Maori claims.

The federal government hasn’t suggested creating a new body responsible for consultation or dispute resolution, the official in Bennett’s office said, but it’s too early to rule anything out.

“This is one of the most open commitments to co-production of policy we’ve ever seen,” Coates said. “We’re going to start developing new policy with Indigenous peoples from the ground up.”