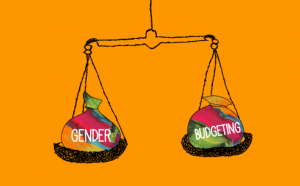 No policy is gender neutral. As such, the national budget—a government’s most important economic policy tool and a statement of its priorities—needs to be scrutinized through a gender lens to ensure that it meets the needs of women and men equitably.[1] A significant social, political and economic gender gap remains in the world today[2]; which indicates that national policies and budgets do not equitably allocate resources across the gender spectrum. Policies aiming to advance gender equality are more effective when done hand-in-hand with in-depth gender analysis, and when their implementation is properly financed by the national budget. Gender-responsive budgeting (GRB) aims to evaluate, and then balance, the gendered impacts of policies by scrutinizing key national budget documents and processes through a gender lens. GRB also identifies opportunities to spend money on the empowerment of women and girls which are sound and likely to have a high return.

Learn more: SDGs, Parliaments and Budgets
At: http://bit.ly/SDGBudgets
This course looks at how parliaments in cooperation with Supreme Audit Institutions (SAIs) and civil society organisations (CSOs) can strengthen their capacities to deliver more inclusive, accountable and open budgets for the implementation of the Sustainable Development Goals (SDGs).

Mind the gap: gender equality by 2030 or 2117?
The global gender gap is widening: according to the 2017 Global Gender Gap Report, the average progress on closing the global gender gap stood at 68.0% in 2017 (down from 68.3% in 2016).[2] If the development continues at the current pace, the global gender gap will not be closed before the year 2117 across the 106 countries covered in the report. The gender gap is the most flagrant in the economic and health spheres: due to the continued widening of the economic gender gap, it will not be closed for before 2234. However, the education–specific gender gap could be on track to parity by 2030. Wile the political gender gap is currently the widest, it is also the one exhibiting the most progress: despite a slowdown in progress this year, it could be closed by 2116. With this in mind, delivering on SDG 5—Achieve gender equality and empower all women and girls—by 2030 will require urgent political action.[4] Many factors impact the gender gap, but fundamentally, the budget determines access and delivery of public services and substantially impacts a country’s economy. As such, gender-sensitive budgeting practices can be expected to lay the groundwork for the closing of the gap.

Gender-responsive budgeting: An introduction
Delivering on the global commitments towards gender equality requires deliberately including a gender perspective across the full policy framework of a country, and by extension, the budget behind it. Additionally, it calls for targeted investments aimed at specific gender gaps across regions, sectors of activity and social strata. Gender-responsive budgeting “combines technical knowledge for equitable policymaking with advocacy and organising to engage with powerful interests and institutions.”[3: p.11]  Concretely, this entails including an additional layer of in-depth analysis to identify areas of intervention throughout the budget cycle, and in policy implementation overall, for the advancement of women’s rights. Gender budget work typically starts with capacity building for relevant institutional actors (such as government ministries) for GRB analysis, followed by a pilot stage of changes to policies and programmes based on analysis, and then the final stages where GRB is institutionalised and systematically integrated[3, 5]:

Since 2014, the Pro PALOP-TL SAI project pioneers gender-responsive budgeting in Portuguese-speaking Africa through capacity building, technical assistance, counseling and facilitation of South-South cooperation, particularly to Women Parliamentary Groups in PALOP and East Timor. The Pro PALOP-TL SAI approach to gender budget work is an integrated model, and follows the recommendations of the Fifth World Conference on Women: Equality, Development and Peace held in 1995 by the United Nations in Beijing.

To assist Portuguese-speaking stakeholders around the world on GRB, the Pro PALOP-TL SAI project has set up a dedicated GRB Portal. This online resource offers technical assistance, examples of the project’s activities on GRB, the project’s model of integrating gender in the national budget analysis as well as GRB mapping across the PALOP and Timor Leste.